- April 27, 2010
After a very sumptuous lunch at Hotel Equatorial, we proceeded to ride the bus that would take us to Kuala Lumpur.  It was a very short visit to Melaka/Malacca and because we basically just moved around the Bandar Hilir area, I'm sure there is more to the whole city than just the Dutch Square, St. Paul's Hill and Chinese temples.  I would like to visit again one day and take in more sights and explore the whole city. We left Malacca at about 1 PM passing through the more modern part of the city until we got to the North-South Expressway....Kuala Lumpur, here we come! It was a 2 hour drive and as soon as we got to the expressway, our guide allowed us to nod off to lalaland ☺☺☺.  After dozing off for a half hour or more, I started to be more aware of our surroundings and there was one thing I noticed...emergency phones every 2 kilometers or so, and there were motorcycle lanes! The landscape was also mostly palm trees, plantations probably...I was trying to look for rubber trees but can't find any or maybe I just don't recognize the difference between a palm and a rubber tree (^-^). 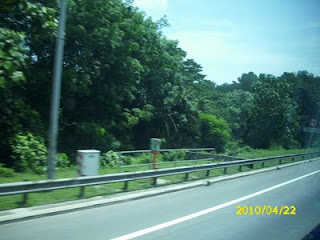 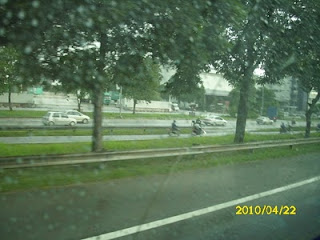 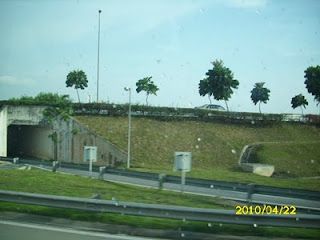 We had a pit stop and let me warn you if you plan to visit Malaysia....most cubicles in public toilets have the squat type while there is usually only one or two cubicles with a flush type.  The malls' restrooms are clean, however the ratio of squat type to flush type is still 3:1.  It made me think...people here must have a thing about squatting.  Okay, hold that thought!   We continued on our way to KL and first stop was....of course, the famous Petronas Tower. 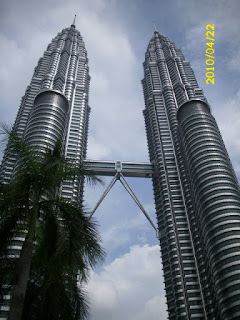 Since we arrived in the afternoon and for lack of time, we no longer entered the premises, besides I have had my fill of high-end malls and buildings in Singapore.  So it was just several minutes of picture-taking and walking under the beating heat of the sun when the cool air of the bus air-conditioning beckoned to me.  Oh, and did I forget to mention in my previous post that several members of my group missed the tender boat from the ship to Malacca port?  Uh..huh...about 8 of them, although I think 4 purposely stayed behind because they have been to Malaysia before.  Anyway, 2 of them decided to follow us to KL after the ship docked at Port Klang which is about an hour away by taxi. So, just as we were finishing our photo shoot at Petronas, the 2 girls arrived and so, all is well that ends well.  Next stop, another mall of course...but thank heavens, it's more like the Araneta Center/Greenhills kind with very affordable goods.  I bought a bag for me (loved it!) and a wallet for my mom at a Vincci store.  BTW, there are Vincci stores in Manila too.  Then it was time to go and tired, sleepy and poorer me went up the bus to wait for the rest.  As we were moving out of KL, Gerry who was sitting on the next seat in front of me started opening his buys...and horrors!  I saw something he bought which I forgot to get....a Malaysian dinner bell souvenir! When I asked him how much he got for it...he said RM 10...what??? I still had RM 20 with me as I was about to board the bus and decided to buy batteries because I did not want to bring home any ringgits...sob, sob...huhuhuhu...how can I forget something that is a tradition in my home?  You see, every time someone travels, whether family or friend, the one thing I ask for is for them to get me a dinner or small bell...My bell collection is now more than 20 pieces and to think that I am the one traveling...how can I forget something like that??? duh....can I hit myself now???  I started to rationalize by saying that I forgot because I was tired and sleepy...and that I already had 2 bells from Singapore...that I forgot that this time I was in Malaysia...nahhhhh...I should go and drown myself in one of those squat toilets, that's what I should do.