Showing posts from September, 2011
Show all

Seeing Adoption in a Different Light

I have 2 children...a 20 year old son and a 3 year old daughter. People not in the know would almost always ask...Why such a huge gap between the two?  I understand their curiosity because if I were in their place, I would wonder too.  And so, I would always take the time to explain that my children are adopted.  But it wasn't always that easy when my son was growing up... not because I wanted to keep it a secret.  On the contrary, by the time he was 4, my son knew that I was not his only mother and that he had another one who gave birth to him.  The act of adoption, fostering and guardianship were nothing new or strange to my family.  There was always an adopted aunt, cousin, nephew and niece in the past and present generation, so it wasn't like being adopted was such a big deal to us.  But you see, I used to think that saying he is adopted would make people treat him differently and I did not want that.  I get so tired of people telling me (and him) how lucky he is; they for
1 comment
Read more

“Everything About Blogging: From Hobby to Money” 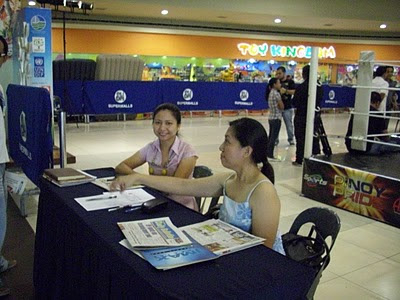 The Negros Bloggers in cooperation with SM City Bacolod sponsored a Blogging Seminar entitled “Everything About Blogging: From Hobby to Money” this morning at the SM Event Center.   More than 50 participants registered to listen to our 2 invited lecturers, Enrico Dee of Biyahilo.com and Lloyd Tronco of Talonggo.blogspot.com . We would like to thank SM City Bacolod through Lorena Quizan Martinez, for allowing us the use of the Event Center, Audrey for the delicious Sugarlandia barquillos and barquiron, Eduardo Mirambel Joven for the tee-shirt raffled off and most of all to Enrico and Lloyd who shared their time, talent, experience and passion for blogging pro bono.  To all of us...happy, fruitful and prosperous blogging today, tomorrow...and beyond! registration table
Post a Comment
Read more
More posts