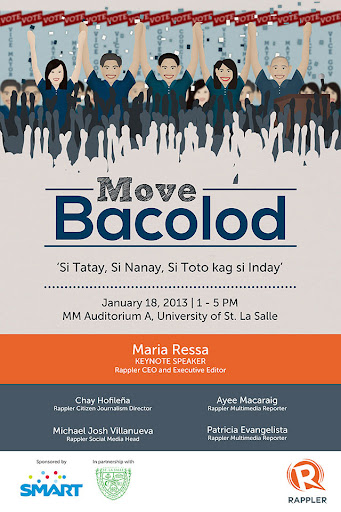 Last January 18, 2013 I attended Rappler 's Move.PH Chat Series held at the University of St. La Salle in Bacolod.  Titled " Si Nanay, Si Tatay, Si Toto kag Si Inday ," the rescheduled forum was Rappler's first for 2013, with the overall theme, "Social Media for Social Change".  But the day before that, a few people came to meet up with Chay Hofileña, Voltaire Tupaz and Stacy De Jesus at Cafe Bob's for an informal chat on current political and social issues. We were representatives from civil society, NGO's, reporters from the USLS college paper, The Spectrum, one journalist, a lawyer and of course myself, representing the Negros Bloggers. The discussions ranged from political dynasties in Negros, social media and how this will influence election results in May to the RH Bill (now law) and the idea of a Catholic vote.  We also talked about the reality of still feudalistic practices that some landowners do when it comes to ensuring that their f
9 comments
Read more
More posts