Showing posts with the label Manila flood
Show all 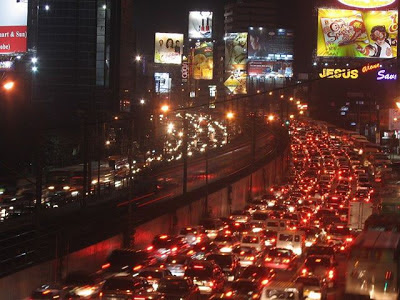 I spent 6 nights in Manila from June 17 to 22, 2013 to attend a Trainors' Training for the Zuellig Family Foundation's Health Leadership and Governance Program.  I was taking the 3:55 PM PAL flight from Bacolod, only it was 20 minutes delayed, so that we departed at 4:30 PM instead.  There was some delay in landing and we finally got out of the NAIA terminal 2 just a few minutes before 6 PM.  We walked to the taxi stand at the other end of the terminal but there were no taxis as it was raining, not heavily but not stopping either.  We finally got one at about 6:40 PM, and the driver asked if we can take the skyway, as traffic was terrible in EDSA and Magallanes.  To end a long story...we got to our destination in Makati Avenue which is a short distance of approximately 10-12 kms from the airport more than 3 hours later!   I think I kept yawning not so much from low sugar (hunger) but from lack of oxygen (CO2 saturated enclosed space).
11 comments
Read more

- September 28, 2009
In August 1972, I remember a big flood happened also in Luzon . For more than two weeks, heavy rains pummeled Luzon before then President Ferdinand Marcos declared martial law. Floodwaters merged with the Pampanga and Agno rivers and submerged most of Central Luzon. This became known as the Great Flood of 1972. I remember working in the gym with classmates preparing relief goods. Classes were suspended in some subjects so that students can help instead. Less than a month after...Martial Law was declared. I don't know why I suddenly remembered this fact...maybe because like Marcos then, GMA's popularity and approval rating is at its lowest today. It's like deja vu...the atmosphere of political conflict, the morale of the people, the air of discontent among the people is eerily similar. Is this a sign? I am not saying that GMA is going to declare Martial Law...but somehow I feel a great change coming. Maybe this is our second chance...maybe God is telling us somethi
Post a Comment
Read more 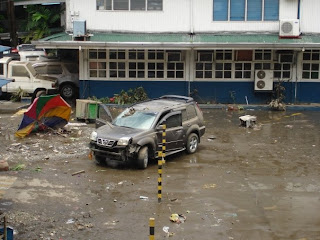 Last Thursday, Tropical Storm Ketsana (better known in the Philippines as Typhoon "Ondoy") entered the Philippine area of responsbility. It was not even a storm yet but a tropical depression. The next day Friday, it was declared a typhoon and signal no. 1 and 2 were raised in parts of Luzon including Metro Manila. However as it swept across Luzon on early Saturday morning, packing winds of 85 kilometers per hour, or 53 miles per hour, with gusts of up to 100 kilometers per hour, "Ondoy" dumped 42.4 centimeters, or 16.7 inches, of rain in just 12 hours, said Nathaniel Cruz, the government’s chief weather forecaster. He said the rain that fell in those 12 hours was equivalent to the amount of rain that Manila received in the whole of September. To make matters worse, it was high tide and the water levels of 2 dams, Angat and Ipo were at critically high levels as well. By sunrise Metro Manila and it's environs were underwater. And for the first time, places t
Post a Comment
Read more

what do I miss in Manila?

- July 06, 2007
I was in Manila for 3 days where I attended a convention/reunion with my fellow graduates of HLMP. It was good to see them and a needed break for me to get away from the pressures of work. One of the activities lined up was to watch 2 plays in the CCP, Palanca in my Mind and Hubad , both of which I thoroughly enjoyed. In retrospect, these are the things I miss most living in the province...the diverse cultural events, the bars and the bands, bookstores (although now, we do have NBS in the province), Mark and Spencers...what I do not miss is the traffic, smog, pollution, the floods, the noise and all the other unneccesary trappings of an urban lifestyle. Of course, what I need most when I do go Manila...is plenty of money...but that's another story :)
Post a Comment
Read more
More posts