Showing posts from February, 2013
Show all

Last January 18, 2013 I attended Rappler 's Move.PH Chat Series held at the University of St. La Salle in Bacolod.  Titled " Si Nanay, Si Tatay, Si Toto kag Si Inday ," the rescheduled forum was Rappler's first for 2013, with the overall theme, "Social Media for Social Change".  But the day before that, a few people came to meet up with Chay Hofileña, Voltaire Tupaz and Stacy De Jesus at Cafe Bob's for an informal chat on current political and social issues. We were representatives from civil society, NGO's, reporters from the USLS college paper, The Spectrum, one journalist, a lawyer and of course myself, representing the Negros Bloggers. The discussions ranged from political dynasties in Negros, social media and how this will influence election results in May to the RH Bill (now law) and the idea of a Catholic vote.  We also talked about the reality of still feudalistic practices that some landowners do when it comes to ensuring that their f
9 comments
Read more

My First Ever Bacolaodiat Festival

Like I said in my previous post , this is my first time ever to attend the Bacolaodiat Festival .  When the festival committee sent the Negrense Blogging Society, Inc. an invitation to attend and cover the activities (February 7-10, 2013), I immediately sent out the call to our board and other Negros bloggers.  After getting our press kits, I was supposed to meet up with 2 other bloggers to watch the dazzling dance parade, lantern street dance competition, the cultural show and then dinner at the chopstick's alley.  Unfortunately, I was not able to watch the parade (could not get off work) and so, I am still waiting for the pictures that one of our other board member took.  Here are some pictures from last year which I took from their website.
22 comments
Read more

Have you ever had a plumbing emergency in the middle of the night and did not know where to find help?  Well, one weekend not so long ago we had some visitors in the house, and I don't know what exactly happened, but by the time they left on Sunday evening, the showerhead in my aunt's bathroom was leaking.  Unlike in the United States (and other countries, as well) where there are 24/7 plumbing services like the 24 hour Emergency Services from Roto-Rooter , I could not think of anyone in my area whom I could call to get it fixed that night. I tried to do some damage control but it only worsened. I was getting a little desperate, and so I decided that the next best thing is to close the pipeline leading to this bathroom to avoid getting up in the middle of the night just to check if the pails were overflowing and prevent waste of water.  You can imagine my annoyance over the inconvenience!
26 comments
Read more

Well, that's what the Chinese Year of the Snake 2013 forecast says for a monkey like me, heheheh. Thus, this is the reason for the change of color of my blog, although I'm not superstitious (okay, maybe a teeny, weeny bit).  Besides, I love the color purple. Now if it said green or yellow, that would be a totally different story because those are not my colors at all!  The monkey's other lucky colors aside from purple, are pink and white both of which are fine with me since my little girl loves pink and I like white.   But it also says that our lucky stone is peridot, which is confusing because being April born, my birthstone is diamond.  Peridot is green (yuck) and diamonds are a girl's best friend! No contest! Snakes are not cute like monkeys (wink, wink)...but the one above is the closest one I found to being one ;) To one and all...HAPPY CHINESE NEW YEAR!
2 comments
Read more

Kung Hei Fat Choi! I first learned this word in 1993 when I went to Hongkong with my mom and brother. I got sick the second day I was there, so all I did was watch television and trying to learn Chinese phrases. But even then, Chinese New Year was not a big thing for a non-Chinese like me (although I do have a Chinese ancestor, way up the line), so I basically forgot it's meaning until 2005 when Mayor Evelio "Bing" Leonardia launched the first Bacolaodiat Festival , Bacolod City's very own Chinese New Year Festival--it comes from the words "Bacolod" & "Lao Diat" (Fookien word for celebration).
17 comments
Read more 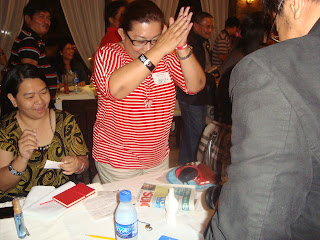 This isn't the first time that the Negrense Blogging Society, Inc. got invited to an appreciation  party but this is the first time that we all had fun!  Last January 25, 2013, Globe hosted a Media and Blogger's Night at 21 Restaurant.  In attendance were media practitioners from print, television and radio and of course, the bloggers group.  You know, it never ceases to surprise me that companies, organizations, festival organizers and even politicians now look at bloggers as a "force" that can influence public opinion and even effect change.  In the past not many people read blogs, but that is no longer true now-a-days.  Bloggers are now seen as good sources of publicity, which more often than not is unsolicited and may be good or bad.  When I started blogging, this was the farthest from my mind...in fact, it never even entered my head. To this day blogging for me is just another way to express my thoughts and ideas...it is not about anything else.  In fact, during
Post a Comment
Read more
More posts