Showing posts with the label healthcare for the poor
Show all

Life After Termination: Inspired By Patch Adams, I Choose To Make A Difference 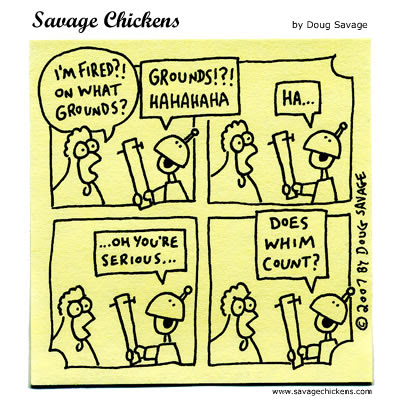 Retrieved from http://www.savagechickens.com/2007/06/youre-fired.htm Last October 14, 2011, I received the arbitrary decision of dismissal without forfeiture of benefits after 29 years and  8 months of government service. Now I know how it feels to be intimidated, coerced and terrorized with trumped up administrative charges that is meant to dismiss, even though I have done nothing to deserve it. My conscience is clear.  So, I won't belabor this fact...except to say, I will of course fight for my rights.  Ok, what next? How does one deal with sudden termination? I did not get angry although many people who know me were.  But I felt it was such a useless emotion because nothing that I did or did not do would change the outcome...I now realize that it was already a given from the start. Besides, like I said my conscience is clear.  I think what I felt was more like disappointment because I thought better of the committee members assigned to hear my case, that they we
Post a Comment
Read more
More posts