- June 09, 2010
It was after the surgical mission organized by the Provincial Health Office in '97 or '98 in Calatrava town that the team decided to come back to Bacolod via the new Negros Translink Highway.  It was about 60% finished then, steep and dusty with some fantastic sceneries.  Today, more than 10 years after, it is a bustling highway and the scenery became even more beautiful. The waterfall which I first saw in the 90's is still there with it's viewing deck.  There are vendors now selling foodstuffs and restrooms! The air here is cold and if you plan to stay longer and explore, it would be practical to wear something  to keep you warmer or bring a jacket. 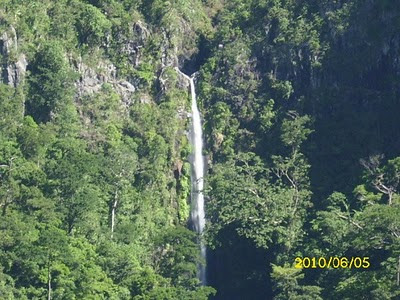 But sadly, there is one thing that has not changed much...and that is, denuded hills. I still do not see new trees in the hills of San Carlos and Negros Oriental.  After some picture taking and a car-sickness mishap (all that zig-zags and curves took its toll), we arrived in San Carlos at around 10 AM.  San Carlos City has not changed much although they have a new City Hall, a park and a high end subdivision at the outskirts of the town proper.  There is a mall but it was basically empty except for some stalls, a few shops and the main department store.  It was also very warm so that we decided to have an early lunch in Jollibee (located in the mall)...then off to replenish some emergency supplies which was all used up due to that one car-sickness episode ;)  We went to look for a grocery store in downtown San Carlos but the only one we found was this popular general merchandise store that sold only cheap made in china goods...oh well. Finally, after getting the bare minimum of what I needed... muscles and legs no longer aching and niece no longer carsick...we were off to our destination...the Lalimar Resort in La Libertad!
local travel Negros Island Negros translink highway road trip travel vacation