Family Secrets...and Why The Truth Has To Be Set Free

- August 13, 2010
I am a relatively honest person...what you see is what you get and I have very few secrets, probably because I am not very good at remembering or keeping one.  On the other hand, I would always tell my friends that if they have something to confide, they should make me promise to keep it a secret and I will honor that promise till the end of time. But what about family secrets? The kind that everyone wants to forget...those that are considered taboo...those which changed lives...or that which was deemed so humiliating and scandalous that to talk about it will mean banishment! (big grin)

Well, I think every family has at least one and family secrets have a way of making themselves known...sooner or later. Why?  Oftentimes, simply because the time has come to tell the real story.  Although I personally believe that family secrets are not subjects for bedtime stories, I also believe that there are those because of their very nature, have been the subject of speculation, hearsay, illusions and delusions, so that an injustice continues to be made to the original parties concerned, as this "perceived truth" is handed down through the generations.  These are the kind that needs to be revealed/clarified and placed in it's proper perspective. Sometimes what people perceive as true is not really the truth but if said often enough, eventually becomes their reality.  The saying that not everything is as it seems is especially true when it comes to family secrets.

So how should a family secret be revealed?  Now, I do not advocate telling it to one and sundry. 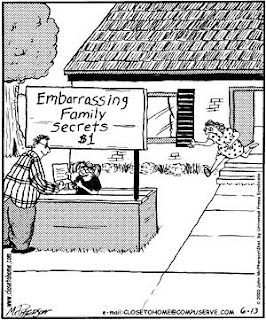 My experience tells me that when the time comes, the person that need to know has to be told honestly and simply. One should be prepared to back up their story with the facts.  Yes, in some cases, the truth will hurt but then, truth also sets us free. It cannot be avoided that shock, blame, regret and sadness will occur when family secrets are discussed, but the sins of our ancestors are not ours and we should learn to understand and hopefully, forgive.  Learning and talking about family secrets has made me a better person, I think...it has made me understand the humanness of our ancestors and man in general...it has given me a broader perspective on illegitimacy...it showed me how people can rise above adversity and denial...it made me realize that things happen to the best of people for reasons only they know...and finally, that family secrets are nothing to be ashamed of, because it is a fact that some of our ancestors' mistakes produced a few of our family's greatest achievements.  Still, there is the question, does the end justify the means?  In an ideal world our private lives should mirror our public lives.  This is why I believe that family secrets when the occasion calls for it should be revealed and used to help future generations learn from the experiences of our ancestors and finally heal the family.

There are no mistakes in life...only lessons.

PS. I wrote this post after many discoveries and realizations I had while doing our family tree :)