- February 27, 2012
I used to think that bringing up kids wasn't all that hard. My parents raised us their 3 children (1 girl and 2 boys), fairly and without biases. We all had the same privileges and got the same kind of punishment when we did wrong. I never felt any more special than my 2 brothers. But when I became a mother to a 3 month old baby boy in 1991, I realized that it was not easy at all and that parenting is the hardest job in the world where there is no retirement ever. And so when I took home a 5 month old baby girl (who was born severely premature) for Christmas in 2008, it was an act of faith and trust that this too is God's will for me and my family. You see, raising my son was a relatively fun task for me, maybe because as the eldest in my family and the oldest grandchild, I grew up looking out for my brothers and playing with my cousins, majority of whom were male. I have always been partial to boys, even as a child. I remember each time my mom became pregnant, I would always wish for a brother. Being used to boys, I understood them better than girls. I was worried not so much about the fact that she might have special needs, but that I wasn't too sure that I knew how to handle girls! If I just based my capability on the limited interaction I had with female cousins and my family's not too great experience with adopted or fostered daughters, I probably would have gotten cold feet. On the other hand, I love children regardless of gender and this angelic, fragile and helpless child stole my heart forever. Indeed, time flies because Preemie girl will be 4 years old in July. She is so different from her older brother when he was her age...in fact, she is the exact opposite. While my son was an obedient and quiet child, my daughter asserts herself all the time and could hit the right decibel to cause temporary deafness when she does not get her way. She is hyperactive and needs to be entertained, quite unlike her older brother who used to play with his toys for hours all by himself. She is inquisitive and a quick study, but is such a handful that I could not help but compare her to Big Brother who is now 21 and the only one who can make her obey at first try. He adores her, of course and enjoys being called "dada" instead of the usual term of manong (respectful title for older brothers). And thank God, except for a really fast metabolism and hyperactivity, she is as normal as any child her age. She is smart and adorable. And she can be so sweet when she wants to. She is all girl...loves using pink lip gloss and polish. 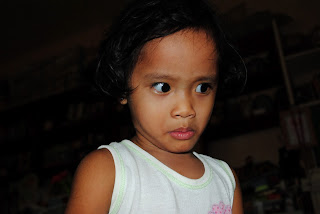 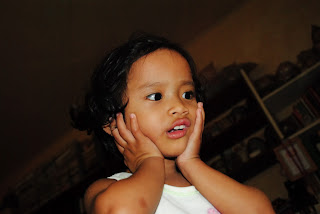 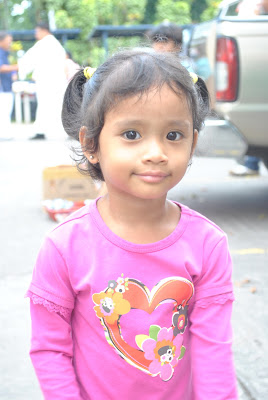 As I write this post, I am inclined to believe that the difference in behavior (aside from genetics, of course) between my 2 kids at that particular age (2-3 years old) is probably because I nurtured each of them a little differently. I had my son when I was a lot younger and with less responsibilities at work, so that I had more energy and time for him. I used to come home for lunch and spend part of the afternoon with him before going back to work. I would put him to sleep and even tutored him. When my daughter came to us, I was at work the whole day, coming home early evening just as she is getting ready for bed. Although she sleeps with me, the time I spent with her is considerably less than the time I used to spend with my son. She spends most of her waking hours with her nanny and since I would bring part of my work home, it was also her nanny who would put her to sleep. Now that I am out of work, I do have more time with her but I have to admit that at my age, an active child is really challenging. We will be putting her in nursery school this summer in preparation for the regular school year this June. I hope by then she learns to sit still, stay quiet and pay attention...otherwise, we are in big trouble.

And Big brother? Well, let me just say that he outgrew the docile behavior by the time he was in grade school...but, that's another story and for another post (big wink).