My old family home was a one and a half structure with rooms on the second floor, built on a 1000 square meters corner lot. The stairs had about 10 steps and as young kids we would slide down the long balustrade. We lived here for 26 years but unfortunately due to circumstances beyond our control, the possibility that we would lose this house was looming after 1985 and so, looking at our options, we could either build a new house or move into my father's ancestral home which was no longer occupied by then since my grandmother stayed in Manila most of the time.
My father's ancestral home was even bigger. It was a two story structure with rooms and living areas both in the first and second floors. My grandmother as she grew older found it hard to stay in her second story room, so we had to move her downstairs. It was during this time that I saw how hard it was to maintain a large house and how dangerous stairs were, not only for old people but for kids as well. I remember my grandmother getting a minor nervous breakdown every time we would go careening down the stairs and jumping from the stairwell down to the dining area as a short-cut. My brother would also dangle his body from the second floor balcony so that my aunt would sneak up behind him and grab him to safety. 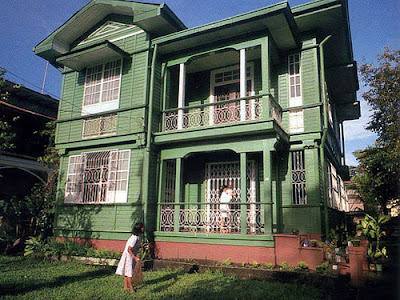 .
Angel Araneta Ledesma Ancestral House
Since I was already working by this time, I decided to apply for a housing loan and with God's grace, got it approved. You see, it was going to be cheaper and more practical for us to build a new house rather than pay the bank for our old and dilapidated home. My mom was able to buy a 400 square meter lot in a neighboring subdivision and this is where we built our new house in 1988. I designed it in such a way that it will be a compact one story house with 4 bedrooms with T/B and NO STEPS.  It was going to be small because I thought the people who would live there would just be my parents, my 2 brothers and I, our 2 household helpers and our beloved german shepherd, April.  I was wrong...when my dad died suddenly in 1991, my maiden aunt moved in with us (my maternal grandmother who also passed away 3 months earlier built a house next door to us) together with her foster child and maid. Then I adopted my son 2 months after my dad died. Today in our home, we are 8 adults, 1 child and 1 dog ( Cookie, a black lab, this time), and the itinerant cat. I am not kidding :)  We used to be 9 adults, until my aunt's foster daughter moved out when she got married.  My brother was no longer living at home after 1990. Of the 8 adults, there's my mom, brother, son, aunt, cook, laundrywoman, nanny and I.  Oh, and I forgot our gardener who comes twice a month.  Can you imagine how crowded and the noise emanating from this house?  We even get visitors who sleep over now and then, and there's always a flow of people coming daily at home, from cathechists, kids my mom helps to send to school, seminarians, parochial teachers, etc...etc...etc...By golly! the house needs traffic lights when this happens. HAHAHAHA!  Although the house was not meant to accommodate this number of people, it doesn't really matter because the love, support, care, concern that we all have for each other is without measure. What matters is that we are one happy family and this is our home.

"A house is made of walls and beams;
a home is built with love and dreams."

"Call it a clan, call it a network, call it a tribe or call it a family. Whatever you call it, whoever you are, you need one."

"Love begins at home, and it is not how much we do...but how much love we put in that action."


-- Blessed Mother Teresa (1910-1997), Saint, world humanitarian and founder of the Missionaries of Charity