Living With Disability - My Mother's Sister

- April 10, 2012
All my life I have known how it is to have a family member with special needs.  My aunt (my mom's younger sister) was born normal but when she was three years old she had measles together with the rest of her siblings.  She was the first to "recover" only to develop seizures about 3 days later.  This was in 1940 and there was no measles vaccine then, nor was measles a well understood disease.  She was brought to the best doctors but at that time the complications from measles were not yet completely known so they thought she developed poliomyelitis and treated her as such. My grandparents placed her on therapy to treat her flaccid paralysis but, she did not improve.  Her condition was aggravated by the onset of WWII when accessibility to health services was not readily available.  From then on, my aunt needed full-time caregiving in order to feed, bathe and clothed.  Although she can walk wobbly, she cannot use her hands and eventually learned to feed herself with her feet.  My grandmother also got sick by war's end and left for the United States for treatment leaving her family behind.  My mom at age 14-15 became surrogate mother to her brothers and only sister.  A little less than a year later, my grandmother came home healthier but by this time, the doctors also gave up on my aunt.  They told my grandparents that she will not have long to live, at most only till her early twenties.  Well, my Tita Mimi will be 75 years old  this May and she is as healthy as a horse. She has outlived her parents and 2 younger brothers. It was only when I was studying to be a doctor that her condition was given a name, Spastic/Athetoid type of Palsy secondary to Post-Measles Encephalitis. And because of this, my mother was so afraid of measles, she had all of us immunized when the vaccine was made available in the Philippines in the very early '60's.  When my grandmother died of cancer in October 1990 and 3 months later, my father also died of a massive heart attack, it was decided that my aunt will move in with us together with her foster child who was then 12 years old. It was not a difficult transition since my house was designed to be user-friendly for persons with disability.  Today, she is wheelchair bound which I believe is something she is quite happy with since walking used to tire her a lot. She has actually "overused" three wheelchairs since she started using one in the mid-90's.  She used to paint and write using her feet, but these too have been stopped due to her vision and posture problems. She spends her days cleaning the insides of her cabinets over and over again, which I presume makes her happy.  Her speech has always been guttural but recently it has worsened, perhaps because she does not talk so much anymore and this frustrates my mother no end because she just can't understand my aunt.  I am more patient in this regard and eventually I would be able to get what my aunt means to say.  Her foster daughter is now married and no longer lives with us, so she has her room all to herself and enjoys watching all her favorite TV programs from noon till night. My aunt's presence in our life and home has taught us patience, kindness and the meaning of suffering. Looking at her, I marvel at how she has been able to bear all her trials with nary a complaint. Oh yes, she did have many "I wish" moments but all in all, she seems to be finally at peace with herself as she faces her twilight years. 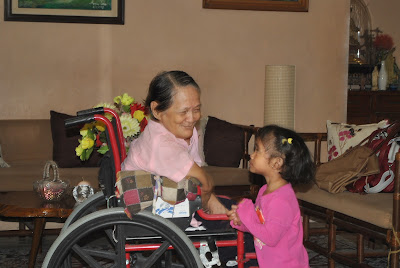