- May 18, 2012
I don't usually write a post about American Idol but after watching yesterday's show and learning about the result today, I could not help but say....whaaaaaat???  Like most Filipinos,  I hope Jessica Sanchez wins but to be really honest, after watching last night's performance, I thought Joshua Ledet was the best among them showing his wide range and versatility.  And to learn that he was eliminated is a great, great disappointment.  Because the brutal fact is, Philip Phillips does not even deserve to be in the top three!
He whines and looks constipated when he sings, and he has only one melody and tune for all his songs.  Everytime I listen to him, I feel like I'm listening to a nasal crying cow...really.  Last night, he struggled (I'm being kind here) to sing one of my favorite songs, Bob Seger’s “We’ve Got Tonight” and I disagree with the judges because it was a bad rendition. I mean, there is a thing as artistic license to modify a song to your style...but this guy did not only modify it, he murdered it...transforming a poignant love song into a "lullaby" as J. Lo so aptly put it...a boring one, that would put even the most restless baby to sleep.  Jessica did not do too well either.  Her rendition of Michael Jackson's "I'll be there" was too bland, like she was just trying to get it over with.  Thus, this time I agree with the judges comment.  She mumbled her Mariah song but I guess it is a really hard song to do (you would need a lot of air), so I forgive her for that.  Her saving grace was the Aerosmith song that she sang with aplomb. I feel bad for Joshua.  He aced all his three songs and his performance was really an affirmation of how he has evolved from a church singer to a professional one.  I hope he will use this as a positive lesson and continue on to entertain us with his great talent.  I know I will cheer him on! 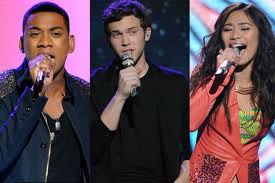 And so, it's Jessica and Philip for the finale next week.  If Phillips win, it only goes to prove that American Idol has lived up to it's name.  One definition of "Idol" is any person or thing regarded with blind admiration. It does not represent talent, skills nor abilities.  Being an "Idol" is a figment of the mind.  If Jessica wins, there are two ways of looking at it.  Either the American voters finally decided to award real talent or the Filipino, Mexican Asian and Black community has banded together to show America's tweens that they could not have it all the time.  I think the latter is more plausible, don't you?
AI finale American Idol 2012