How I Claimed The Samsung Champ I Won For The Greatness Starts @Home Blogging Contest!

- May 22, 2012
I rarely if ever win anything. So when I was sent an email last May 17, by Globe Social Media that I was one of the winners of the minor draw for the Greatness Starts @Home Blogging contest, I was so excited!  This was the blogging contest conducted by Globe Tattoo which ran from February 25 to March 17, 2012.
But, I was so busy that I did not check the website for the raffle winners.  It's a good thing that Megan (staff in-charge at Fluxion, Globe Telecom Plaza II) was very diligent in trying to locate the winners.  She finally found my Twitter account and contacted me.  It was serendipitous too that I was coming to Manila today for a seminar, and so I planned to go to their office directly from the airport and from there get to the venue by 2 PM in time for the afternoon session.  Unfortunately my flight was delayed for about  40 minutes and the car that picked me up is not color-coded for the day.  But God always makes a way and as I was trying to think of a way on how I can get to Pioneer St. in Mandaluyong, I called my cousin who is also here in Manila attending to her daughter who is entering DLSU as a freshman.  And guess where they were?  At the MOA, having lunch since they postponed going to Ocean Park today.  I was at Orchid Garden Suites, which was a stone's throw away!  She agreed to bring me to Globe Tower II where I finally was able to claim my prize :)  Of course, when my cousin learned that the office was in Mandaluyong she wanted to rescind her offer, but I convinced her that there would be no traffic and miraculously, we got there in less than 30 minutes from MOA.  Leaving the area was another story though but their driver had great initiative and took a detour which got us home in no time.

Winning a Samsung Champ may not be much to some people but to me who never wins anything in a raffle, this is such a big thing, Thank you Globe Tattoo! 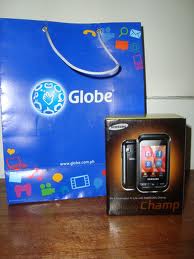