A Scholarship For Underpriviledged Kids

- May 17, 2012
Summer is almost over and parents are busy preparing for the opening of classes in June. But there are probably just as many kids, if not more who will not be able to go to school this year because of lack of resources.  This is especially true for financially poor high school students who would like to go to college.  Instead, many of them will start working menial jobs or for some, if they get lucky may get a college scholarship. 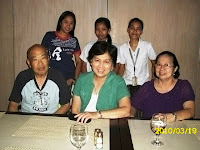 In 1992, the then parish priest of San Diego Pro-Cathedral, Fr. Felix Pasquin started a college scholarship project for the children of our parish workers who generally belonged to the lower strata of society.  With the help of US based friends, he was able to gather enough funds to send one child to college.  My mother was tasked by Fr. Pasquin to manage the project.  She began to solicit contributions from local sponsors so that more kids can be helped.  Today, the project has produced three education graduates and one civil engineer. Currently there are 4 scholars and two more will be added this schoolyear.  Fr. Pasquin has long been transferred to San Sebastian Cathedral but his project lives on.  The US based donors continue to support 4 scholars while the local donors will support the additional two scholars.

Although I see these kids come to the house, my involvement with them was limited to helping them communicate with their US sponsors. But this morning, I saw in the eyes of a young girl, the desperation and fear that she might not be able to go to college. You see, the scholarships are for 4 years and my mother could not get a new scholar unless one graduates. This girl, who was accompanied by her sister who is a volunteer catechist, needed to pay her initial enrollment fee by tomorrow. Whatever amount they raised was lacking and they had nowhere else to run to.  I felt so sorry for them but in our own financial situation now, there was no way we can help at the moment.  And then I remembered my friend who works in that college.  I called her and she came through for us.  All they needed to do now was just pay 50% of the required initial payment and make a promissory note that they will comply with the rest when school opens.  They had more than enough money for that.  My mother then decided that she will ask her local sponsors for additional contributions so that this girl can also be helped.  After making a few calls and using her persuasive skills, my mom had enough funds for an additional scholar. I guess people trust her because she does not abuse their generosity nor does she ask for more than what she needs. I suggested, and she has agreed in principle, that the scholars who have graduated and have found stable jobs will be asked to donate to the scholarship fund, an amount they can afford to share so that this laudable project can continue to help other kids with the same dreams as they had.  In this way, they pay it forward.  My mom is now 10 years older than she was when this project started, but I know that this will go on even if she can no longer manage it. Why?  Because I have seen how this has changed the lives of those who have benefited from it and so, I pledge to keep it going and growing, and to pass it on to people who will continue to do so.