Our harassed travel agent cum tour guide arrived early the next morning to pick us up for the "part of the package, shouldn't be missed" half day city tour.  There were just 6 of us (my aunt-nun has joined us by this time) and so our ride was the same van that we rode from the airport.  Our tour guide was named Eric and he was very informative and his Chinese English with a British accent was very entertaining.  He says pooh instead of poor and people turned to peepoh...heheh.  On our way to the cross harbor tunnel which we will be entering to go to Hongkong Island, he pointed out heritage places, shopping centers, hotels, schools as well as tenement houses which had clothes lines hanging out from window to window up to the top floors. But remember this was in 1993, so I don't know if this practice is still common in the Kowloon part of Hongkong.
As we approached Cross Harbour Tunnel, Eric told us that this was opened in 1972 and was about 2 kms. long. It is the first tunnel built in Hongkong and the busiest. It was quite exciting to enter the tunnel knowing we were right below a body of water, the Victoria Harbour. As we emerged from the tunnel entering Causeway Bay in Hongkong Island, we proceeded to Victoria Peak. On our way, I saw cemeteries on the hillsides and they explained to us that these were old Christian cemeteries and those buried there were the British military dead and the moneyed class.

This is the highest point in Hongkong Island and we got there through the circuitous Peak Road.  On our way up we saw many beautiful  and gated houses but what struck me more was the drainage system on the hillsides which without doubt ensured that no landslides occur here. We reached the viewing deck after a while but at that time there was not much to see in the area except for restaurants and souvenir shops, unlike today where there is now the Peak Tower in which there are several attractions namely, Madame Tussauds Hong Kong, Ripley's Believe It or Not! Odditorium, and the Peak Explorer Motion Simulator. Since it was a bit foggy, I was not able to take good pictures.

From the peak we proceeded to Repulse Bay.  Although the weather was a bit gloomy and there were rainshowers, we had fun taking pictures with all the different statues of Buddha.   We did not stay long as Eric was hurrying us because we had a boat to catch...at Aberdeen Harbour.  There we were shuttled into sampans which took us for a quick tour around the harbour where the Aberdeen Jumbo Floating Restaurant can be found amid all those little boat houses.  This is where  "pooh peepoh" (poor people) lived...so called because they do not own land, Eric told us.  But notwithstanding the fact that they were landless, these boat houses then already had air conditioners, washing machines, TV antennas what more now, with cheap technology easily accessible?

From there, our last stop was a jewelry store where I bought a bracelet and of course, duty free shopping where I did not buy anything. By the time our guide released us it was way past 1 pm and I was so hungry, dehydrated and feverish.  We had a late lunch somewhere near the hotel but I was not feeling well anymore and just wanted to sleep.  The city tour was very basic, so you do not really see anything much of  the real Hongkong.  What annoyed me was the fact that the tour guide was so time-oriented that he would not stop for anything that was not on his itinerary like food and water, for example!  Since I was too indisposed to do anything else, my brother kept me company while the rest decided to explore Kowloon.  This is the reason I missed riding the Star Ferry and subway as well as going to the night market.  When my mom and company got back, they had all these shopping bags while I was trying to learn chinese on cable TV.

The next day we were booked for Ocean Park and yes, it was Eric again who was our guide but on a big bus this time.  There were some Filipino tourists with us and because it was raining, we shared our umbrellas (yes, we were prepared for the weather) with some of them.  We took the cable car and when we got there, it was again raining.  Since I was still not feeling too well, although no longer with fever, I was careful not to get wet. 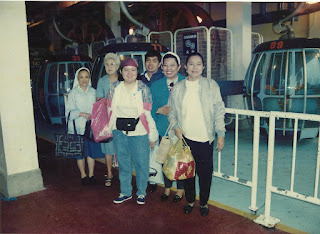 The park rides were not open in some areas due to maintenance services but that did not matter because I was more interested in seeing the dolfins.  I do not remember everything of what we did there, but we did see the sharks swimming above us while on a walkalator, rode the world's second longest outdoor escalator and ate our lunch there.  We also got to watch the shows in the outdoor Ocean Theater and Middle Kingdom.  I got tired walking and sat in one sidewalk chair where I talked with some Filipino nannies who were with their Chinese charges.  This was 1993 and most of those I talked to were high school graduates and seemed to be satisfied enough with their jobs. 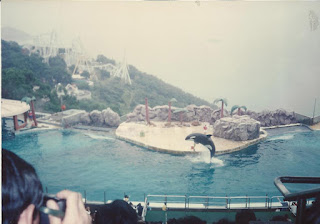 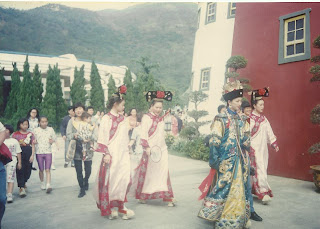 We then went to check out the other attractions and the souvenir shops before we were all taken back to our respective hotels. Later in the evening, my mom, brother and I opted to have dinner in our hotel room. I checked the brochures for a fast food chain and found that there was Kentucky Fried CHicken (KFC) just around the corner of our hotel. I got us a six pack only to find out that they ran out of gravy! Now tell me...what is KFC without the gravy? They offered me catsup instead...grrrr. Oh well.


We spent the next day walking around and doing some shopping. The Hongkong Cultural Center and Clock Tower are just a few minutes walk away and so is the Star Ferry. This area is huge and the cultural center itself is impressive.  The interiors reminded me our Philippine International Convention Center. There were a few newly-wed couples having their pictures taken there. 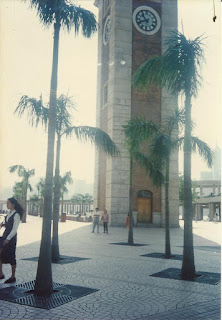 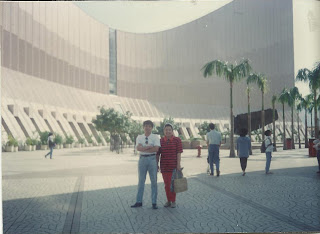 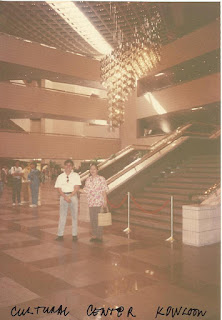 We spent the rest of the day just window shopping because frankly, Manila prices were lower compared to Hongkong in imported label stores like Marks and Spencers.  The bargain prices can be seen in stores like Esprit and Giordano since these are homegrown brands.  So we did not do much shopping except for things that we were asked to buy.

We left Hongkong 5 days after we arrived.  It was a good experience but while there, I also realized how much more beautiful our own country is and much less expensive. Although this was Hongkong almost 20 years ago, it remains a big city and I don't think life in any big, overpopulated city is any different from each other. The quality of life suffers and living in the province where life is simple but good...I can say with all sincerity, I'd rather be here than there.