- October 28, 2013
The whole province of Bohol has been devastated by the 7.2 magnitude earthquake last October 15, 2013. Centuries old churches have been totally destroyed or damaged and 200 people have lost their lives. Damage to infrastructure, property and agriculture is estimated to be P900 M.  Aftershocks continue to this day.

My first visit to Bohol was in May 1999.   Bohol back then was not the tourism destination that it is today. All I knew of Bohol at that time was that it is a province in Eastern Visayas where the blood compact was done, and in graduate school which discussed the behavior pattern of Boholanon workers during fiesta time.   And so, when my mother attended the Museum Volunteers of the Philippines Biennial Conference in Cebu and Bohol that summer, I decided to join her for the Bohol part of the trip.  We all took the early morning fast ferry to Tagbilaran and we were met by the province's tourism staff with a welcome banner of "Ma-adyong Pag-abot!".  I don't remember much about the port except that it was sparse and unimpressive but clean.  We then proceeded to La Roca Hotel, the conference venue and where we were billeted as well.  I think this was one of the better budget hotels in Tagbilaran at that time.  Although I was not an official delegate, I was able to listen to many of the discussions and this was the beginning of my love affair with heritage conservation.

A heritage and cultural tour was scheduled the morning we arrived.  The tour started in Baclayon Church, where we were told of the church's history and presented an excerpt of the play about the life of Francisco Dagohoy, by the Teatro Bol-anon.  I remember Dagohoy mentioned in history classes but vaguely remember him.  Our guide who I believe was the provincial tourism officer, gave us so many details about his life making sure we would not forget this man whom Boholanos are so proud of.

I must make mention of an oddity I noticed inside the church, something I haven't seen in any church before. This was the presence of long benches fixed against the wall in the church of Baclayon. I am sorry that I do not have a picture of this, remember this trip was before the time of digital cameras and I was trying to conserve film and batteries.  In fact, a lot of my pictures were either over or underexposed.  Thank God for friends and the internet!  After the earthquake a friend posted his Bohol pictures and he had one :)

According to our guide, in churches during the Spanish times, these side pews were reserved for cabezas (town official), important people and prominent families, while the rest of the common folk (indios/natives) either stand, sit or most likely kneel on the floor during mass.  My reaction was...really?!? No wonder they had the longest revolt in Philippine history.

We went to many other churches and what was remarkable was that all of them had museums, where many church relics, artifacts and beautiful antiques can be found giving us a good picture of our Catholic history in the Philippines; and one of which was this thing. 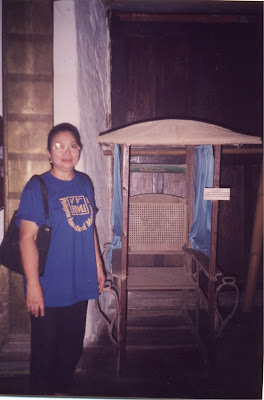 This was a chair that was used to carry the Spanish priests when they traveled to the barrios to say mass. If you look closely at the picture there are rounded metals at the sides where a bamboo or wooden pole can be inserted and then the chair is hoisted on a man's shoulder.  It is told that it took 2 to 4 men to carry the priest. Under the chair was a cabinet which contained the things needed for the mass.  Why were they being carried? Can't they walk?  There was no exact answer, but maybe it was for a reason as simple as not getting their feet dirty.   Again, no wonder they had the longest revolution ever!

The facade of the church in Dimiao reminded me of the San Agustin Church in Manila and in 1999, had an excavation outside where archeological diggings were ongoing.  This was discovered accidentally and was called the Ermita Ruins, which are the ruins of a coralline limestone structure built during the Spanish Regime. It's past is a mystery, but they theorized that this area was allegedly used as a military fortress, a chapel and a burial site of the members of the Spanish clergy. Well, we saw the burial sites with very well preserved skeletons, one of which looked suspiciously female from the shape of the pelvis ;)

By the way, I was very impressed with Dimiao which was a 5th class municipality then, but they had a newly built technology and development center which helps provide livelihood to their constituents.  They also had a world-class children's rondalla, that year's National Music Competitions for Young Artist (NMCYA) winner.

The other churches we visited were Dauis, which I remember because of the well inside, Sta. Monica in Albuquerque, and of course, Loboc.

Who can forget Loboc?  This was the town where we spent a bit more time compared to the other places.  We had our lunch here (during the river cruise) and were honored to be given a short but angelic presentation by the world-famous Loboc Children's Choir.  We were told during our visit that the church was sinking by a few millimeters each year, so that it was actually sort of leaning.  The church was Jesuit-built in the 1600s, but the old convent was built by the Agustinian Recollects in the 1700s, when they took over the church.  The old convent is now the Museo De Loboc.  When I went back to this town in 2008, I saw some good changes, like the river cruise now having a organized docking terminal, although I am not so happy with the entertainment stop mid-river.  Still, some things that should have change for the better never did (not even by an earthquake), like the monstrosity of the unfinished bridge built directly in the path of the church.

The tour included the Blood Compact Sculpture by Abueva just before Baclayon and the Clarin Bahay na Bato in Loay.   It was almost evening when we reached the Clarin House and in 1999, this was lived in by caretakers. The owners however very kindly waited for us and gave us a full tour.  In 2008, I was told that the house has been re-used as a restaurant.  I remember passing by the side of the Loay Church, but we no longer stopped since it was getting dark.  The next day, we visited the home turned museum of the late President Carlos Garcia. A short distance away, we walked to the impressive provincial library and the St. Joseph Cathedral in Tagbilaran City.

Ever since I was in high school, I have always been interested in history and genealogy, but that was all it was...an interest. My mother was involve in the Silay Heritage Society and was part of the group who fought for the conservation of the ancestral houses in mainstreet Silay.   Yet, it took this trip to Bohol and listening to the stories and lessons in heritage conservation of the province that my "interest" turned into advocacy.

As I said earlier, I went back in 2008, not as a tourist but to speak in a seminar this time. However, I had a bigger reason for wanting to go back to Bohol.  It was to go to the Chocolate Hills!  You see, in 1999 the group from Bacolod and Negros had to end our stay prematurely because our flight back home the next day to Bacolod  from Cebu was moved to an earlier time slot.  The tour to the Chocolate Hills was scheduled at 2:30 in the afternoon however, the last boat to Cebu was at 5:00.  We had no choice but to miss the tour.  Can you imagine my horror?  To be in Bohol and not see the hills...terrible!  So when the offer to be part of the seminar came, I did not blink an eye.  Nothing can stop me from seeing the Chocolate Hills...NOTHING!  Not even Typhoon Frank.


PostScript:  I will go back to Bohol some day soon. I still have to visit its famous beaches and dive sites.  But, it is the Churches that beckons me to come again.  The first time I entered those churches and their museums, I felt like I was transported back in time...the only thing lacking was for me to be in baro't saya.  I want to feel  that sense of being present in the past once more.  And that, my friends, can only happen in a place like Enchanting Bohol.