- April 27, 2014
Where you there when St. John Paul II (then Pope) visited Bacolod in February 1981? What do you remember about this historic event?

The Papal visit came at a time when Bacolod and Negros Occidental needed it most. The sugar industry was in a deep crisis, militarization in the island was at its highest, farm children were starving, and then there was the Don Juan tragedy. People were excited, there were such high hopes about the visit. The place in Bacolod where the Pope would be saying mass was at the reclamation area. This place is now where SM City Bacolod, Bacolod Pavilion and Resort and the Bacolod Seaport can be found. But in 1981, this place was just a huge and vast field of cogon grass. For the Pope's visit the area was cleaned and cordoned off.


My Dad, Mom and brother, Ted decided against joining the crowd at the reclamation area, and instead went early morning to the Goldenfields area in order to get a good parking space, where they can see the Pope as he passes by from the Bacolod airport.  This is what they saw. 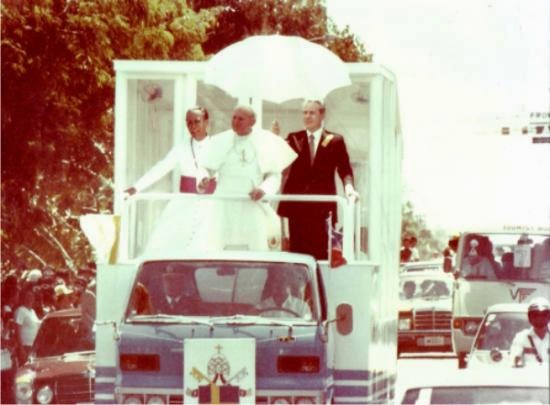 My mom was so excited that she started running after the Popemobile and subsequently tripped.  She had bruises and scratches on her knees and elbows as a remembrance. She was so happy to catch even just a glimpse of him. At that time, she would never have thought that 18 and a half years later she would come face to face and be blessed by him.


I was a Post-Graduate Intern (PGI) at Riverside Medical Center doing my pediatric rotation during that time. My co-intern and I were informed that we will be the medical team assigned to look after the elderly and disabled pilgrims who will see the Pope in the reclamation area.  I was so excited to go but a few days before we were told that only one intern will be sent because our Pediatric Department Chair will be taking the place of the other.   Of course, since I was the one off duty, I was the privileged intern.

Although the days before and after the big event are no longer clear to me, I remember certain details of that afternoon vividly.  We arrived at the reclamation area sometime after lunch.  It was so hot and dusty.  Dr. Aromin (our department chair) was well prepared as she wore a top with long sleeves and a wide brimmed hat.  I was wearing my short sleeved white overcoat and brought an umbrella.  We were situated right beside the stage and there were about 50 or so handicapped, some on wheelchairs and about the same number of elderly.  I do not exactly remember the time she arrived, but I remember the "vision" of Imelda Marcos in pink terno, her beautiful face and fair skin protected by a pink umbrella held by some military officer in gala uniform.  Taking in the social and political situation in 1981, it was no wonder that even though she was a sight to behold, her presence was largely unwelcome. But, the tension in the stage did not last long because a few minutes later the crowd started chanting, signalling that the Pope has arrived. 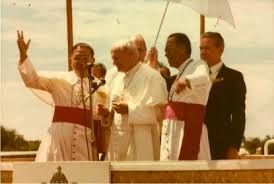 From then on, everything was a blur for me, I was in cloud nine (even forgetting the reason why I was there) and all my attention was on the Pope.  I could only remember waving wildly.  When the people were asked to raise their rosaries to be blessed, I was in a panic since I could not find mine...so I raised my umbrella instead.  Sad to say that blessed umbrella has disappeared from my house a long time ago.  When it was all over, and the excitement died down, I realized that I was partly sunburned on the left side of my face and arm where the sun hit our group, but not on my right side!

My encounter with Pope John Paul II was short and may not have had a lot of meaning for me in 1981, but his Sainthood today gives it a another dimension, a new meaning, and above all, a great blessing.  I can rightly say, I am blessed!  Totus Tuu!