How To Celebrate The Chinese New Year in Bacolod City

- February 01, 2016
Chinese New Year will be on February 8, 2016, the start of the Year of the Fire (Red) Monkey.  I am not superstitious and don't really believe in fortune-telling, but I am open to all suggestions since I was born in a monkey year.  Not many people or places celebrate Chinese New Year but in the Philippines, it is a public holiday.  Most Chinese-Filipino communities in other parts of the country have some sort of celebration, whether big or small.  Here are some ways to welcome the Year of the Fire Monkey in Bacolod City and the Province of Negros Occidental:

In Bacolod City, we have the Bacolaodiat, our very own Chinese New Year Festival. Began in 2005, this will be the 11th year of celebration.   It comes from the words "Bacolod" & "Lao Diat" (Fookien word for celebration). Festivities will start with a grand parade and street dancing competition of February 5, 2016.  There will be dazzling illuminated colorful giant lanterns, lighted floats, fireworks, a Chinese food alley and cultural dances. Venue for cultural events will be in the area of the Capitol Lagoon where the following can be found: Imperial Grounds and Chopsticks Alley.  The Lantern Dance Parade will be on February 7, 2016. 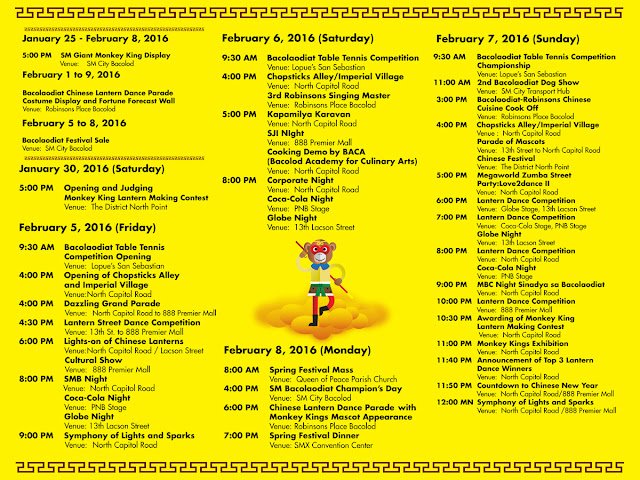 
There are several of these in Bacolod City and I know of at least 3 namely: Fa Tzang Bodhi Grove Chinese Temple at Narra Ave, Shan Yuan Thong Temple located in 2876 Burgos Street, 6th Road Bacolod City and the Chinese Temple found on Kamunsil Street at the back of Santuario De La Salle of the University of St La Salle.  While there you can witness ceremonial beating of the drums, releasing of lanterns, do incense offering and maybe, you can have your fortunes told.

If you like football, this is a chance for you to watch an AFC (Asian Football Cup) qualifying game on February 23, 2016 at the Panaad Stadium, Bacolod City featuring Negros Occidental's very own Ceres-La Salle vs Selangor (Malaysia). A fun and exciting way to start the year!

So there you are! Let us all welcome the Chinese New Year with wishes of peace, good health and lots of laughter for everyone!