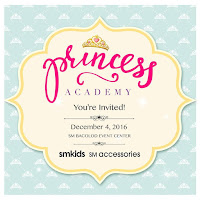 Last Sunday, December 4, 2016, through SM Kids and SM Accessories, the Princess Academy came to the Kingdom of SM City Bacolod. We got an invitation to attend as guest and this will be the first time that Preemie girl will be attending, so you can imagine our excitement!   But with the school intramural just finished, the  on-going practices for her First Holy Communion, and as a full-time working mom nursing a bad cough, I simply had very little time and energy left to prepare. In fact by the end of the working week, I was trying to convince Preemie girl not to attend anymore.  However, unlike in the past where my little girl was not that interested, this time she really wanted to go.

By Saturday afternoon, my cough was getting better and so, we started choosing what dress and shoes to wear. At first she kept on asking me if she can wear her Supergirl costume, insisting that Kara (Supergirl's name) was a princess of the planet Krypton (she was not).  I said that this was a different kind of princess, you know, the Disney kind. Among them, Preemie girl likes Belle, Mulan and the Little Mermaid, but we did not have a costume for any of them, so we finally settled on her new party dress we were reserving for our new year's eve party this year.  She was very excited because she woke up quite early for a Sunday morning.  Although she is quite the little rascal most of the time, her inner "princess" attributes would appear now and then. This was one of those days. 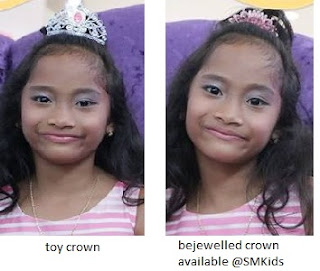 But first, some pictures at the Metro Click Photobooth. 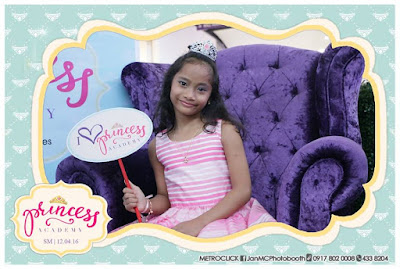 The girls’ Headmistress for this Princess Academy was ABS-CBN Cebu lifestyle host and model Blinky de Leon. With the headmistress, it was a fun day of learning for princesses-in-training ages 4-12 years old.  They were showed the Regal How-tos, like how to sit like a lady and how to walk with confidence. They  learned some Royal Etiquette, like how to introduce yourself when meeting new friends and how to curtsy. 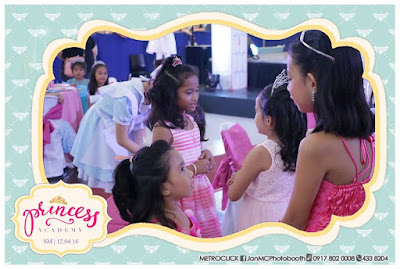 And then, there was a high tea party where the royals-in-training learned how to mind their manners, from placing their table napkins on their lap to eating cookies in a proper manner.  When that was done, they were asked to stand and line up for their regal walk and Princess Parade around the mall.  Preemie girl and the rest of the participants were awarded Royal certificates as certified princesses after the parade.

It was an enjoyable and memorable afternoon for my little girl, of course with some shopping afterwards.  She also asked if there was a Fairy Academy?  Maybe. Why not?  With SM Kids and SM Accessories, anything can happen and wishes can come true!