Take my younger brother, for instance...


January ended quickly and February was uneventful...at least up until the 26th.

Sunday, February 26 started quietly. It was going to be a lazy day. Not quite.

My brother whom I wrote about here in this blog, fell on his face after a seizure (absence type) and suffered a bad cut above his upper right brow.  There was blood all over the floor and when we lifted him, that's when I saw how deep the cut was. But God in his infinite goodness and wisdom, has made me a doctor and someone who hoards stuff "just in case", like medical supplies, for example. I found several Steri-strips, which I used to close the wound and this stopped the bleeding, so that we did not have to go to the hospital. To make a long story short, the wound healed without any complications and life carried on.

Summer was okay, no untoward incidents happened and before I knew it, it was June and classes started.  My brother's attacks were few and far in between and it seemed under control until late August when he had another one early in the evening while on his way to the bathroom. This time, my 83 year old mom deemed it fit for her (who walks with a walker) to try and catch his fall, thus resulting in injury to herself. Once again, I thank God for the guardian angels whose intercession avoided a major accident. My mom suffered a cut upper lip, while my brother was none the worse after his fall.  Still, it was quite traumatic for my mom who at her age, also have a few health issues of her own.

The most recent attack and hopefully, the last was mid October. This time, it was not just a few seconds of lost consciousness, but an epileptic one which lasted for about a minute. It was after lunch on a Saturday, and while my brother was brushing his teeth, he lost consciousness and fell. Our house helpers ran to lift him up and he was conscious by then. Thinking he was okay, we walked him to the bed and just as he sat down, he started having seizures again but not just the absence (petit mal) type. He was having a grand mal seizure, the first time ever since his accident in 1976.   Although his doctors have prepared us for the possibility of Post-Traumatic Seizures, it was still unexpected. When he was allowed to come home (after a year) our mom was told that my brother may experience some form of seizures, which may occur more often as he grows older.  Well, while growing up, he did have some sort of upper arm spasms but no loss of consciousness. It was not until he turned 50 that repetitive head movements with loss of awareness lasting from 5-10 seconds started to happen in a more regular manner. We have increased his maintenance medicine since then, and again after this last episode.

For the last 41 years my brother has lived a life limited by his physical disabilities and speech impediments caused by his brain injury. He was 12 when he had his accident and he is now 53, uncomplaining, prayerful, always thinking of others before himself.  He is such positive person in spite of everything that has happened to him, so much more than I can ever be. 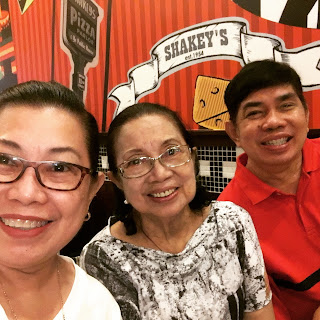 I continue to be thankful for the life God has given my family, especially my brother. We cannot ask for more.


*"When life gives you lemons, make lemonade" is a proverbial phrase used to encourage optimism and a positive can-do attitude in the face of adversity or misfortune. Lemons suggest sourness or difficulty in life, while lemonade is a sweet drink." (definition taken from Wikipedia)